Drug offenses can be prosecuted on the state or the federal level. State and federal laws both take a strict stance on drug offenses, given that substance abuse causes needless deaths and injuries. If you’ve been arrested for a drug crime, you can turn to an attorney for help. Even if you haven’t yet been charged, but believe you could be the subject of an investigation, a lawyer can help you understand the relevant criminal law, and he or she can begin building a strong defense on your behalf.

Possession
As your criminal lawyer near Mineola can inform you, drug possession is among the most common types of drug offenses. There are two different types of possession that the prosecutor may try to prove. The prosecutor may try to prove actual possession, which means that a police officer allegedly found a controlled substance on your person, such as in your pocket. Constructive possession means that you allegedly exercised control over a place where the controlled substances were found.

For example, a police officer executing a search warrant may have allegedly found drugs in your gym locker or in the glove compartment of your car. In order to be convicted, the prosecutor must prove

that not only did you knowingly and intentionally have possession of an illegal substance, but that you did not have a valid prescription. You must also have possessed a quantity that would be considered sufficient for sale or your personal use. There are a number of ways your lawyer can defend you from a charge of possession, such as by pointing to your lack of knowledge of the controlled substance. 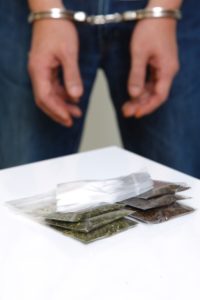