Police officers in the United States have broad powers to keep the peace. One tool that officers often employ is a ‘ Stop and Frisk.’ A stop is a brief, non-intrusive interaction with a suspect. Even though officers are not required to have a warrant every time they make a stop, they are required to at least have reasonable suspicion that a crime has been, is being, or is about to be committed ( reasonable suspicion is a lesser standard than probable cause; courts look at the totality of the circumstances to determine whether an officer has an objective basis for suspecting criminal activity). The frisk is supposed to be a quick pat-down of a person’s outer clothing for dangerous weapons, although these searches are sometimes more intrusive. Despite the divide between opponents and advocates for stop and frisk, it is important to understand what your rights are if you are stopped.

Officers are empowered to stop and frisk as a result of a Supreme Court decision from the 1960’s – Terry v. Ohio. Lower courts must abide by the Supreme Court ruling because it is a mandatory authority, which means it is binding in all other courts of law. In Terry, a police officer observed several men outside of a store. The officer found their behavior suspicious because they would peer into the store, walk down the street and speak with one another, then walk back to the store and look inside again. The officer observed these men perform the same actions nearly seven times and believed that they were preparing to rob the store.

The court held that the officer’s searches of the suspects were reasonable and found that the officer’s suspicion of the men would lead a reasonably prudent person to believe that they were armed and posed a threat to the officer’s safety. The decision focused on the reasonableness of the search, the justification for officer safety, the public’s safety in dealing with armed and dangerous individuals, and the effective prevention and detection of crime. Officers must be able to make stops for investigative purposes to prevent crime.

Over the next fifty years, stop and frisks certainly increased in frequency. Consider, for instance, that in 2011, New Yorkers were stopped by police officers 685,724 times, but 605,328 were totally innocent (88 percent). These numbers raise questions about the effectiveness of stop and frisk – does it accomplish its intended purpose?

Advocates for the stop and frisk program highlight the fact that police officers simply cannot do their job without this tactic. It provides a quick and cost-effective measure to investigate suspicious behavior. Without this ability, officers would not be able to intervene in suspicious matters.

Opponents against stop and frisk cite its overuse, especially in New York. According to a recent Vera Institute survey, 44% of young people surveyed indicated they were stopped repeatedly—9 times or more, yet less than a third—29% —reported ever being informed of the reason for the stop.

A stop and frisk can be a daunting experience especially if it hasn’t happened to you before. In some cases, racial profiling and harassment have been documented (warning, strong language is used in the video). That’s why it’s crucial to understand your rights if you ever find yourself in a police encounter. If you are stopped by the police, remain calm and courteous. You have the right to remain silent. This is your right not to say anything at all. Often times, people try to talk their way out of a ticket or a stop. Instead, do not say anything and wait to speak with an attorney. You have the right to refuse to consent to a search. If you provide consent to search for an item, you can reasonably restrict the scope of the search. Do not run from an officer, fight with an officer, or interfere with an investigation. This can lead to an arrest on an obstruction of justice charge, or worse if physical contact is made. If you are stopped, always ask if you are free to leave.

Although a federal judge held that New York’s stop and frisk policy was unconstitutional, this will not prevent stop and frisk from being used by law enforcement officers in certain circumstances. While reforms are taking place, the possibility that you are stopped or frisked remains possible. The attorneys at Schalk, Ciaccio & Kahn, P.C. specialize in criminal defense matters and should be consulted if you have been arrested. They treat each client with care and respect by providing legal advice relating to a variety of criminal proceedings. For additional information, contact a member of the firm. 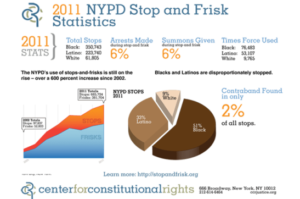 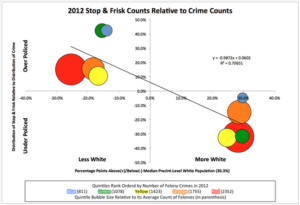