The grand jury in the Ferguson shooting will be prepared to share its determination within the next few days. Most people are familiar with the story: a young, African-American male was shot and killed by a Caucasian police officer. While this is enough to rile the senses of some, Officer Darren Wilson, the policeman involved in the shooting, has not been tried yet. Although some people are sympathetic to Michael Brown’s family, others side with the officer – they know that his family is endangered by the tragic event, that he is claiming self-defense, and that his voice has been silenced by the media. Protests continue as people offer their thoughts about the shooting. While Officer Darren Wilson has already been tried and convicted in the court of public opinion, whether the grand jury will actually indict him is another matter entirely.

As a preliminary matter, a grand jury is composed of twenty-three citizens and is assembled before trial to decide if the prosecution’s evidence is sufficient to charge the accused of a specified crime. A grand jury has limited functionality and does not decide guilt. Instead, the grand jury determines whether formal charges should be brought in the first place. A New York State grand jury has the power to take several actions, including filing an indictment (misdemeanor or felony charges), voting a “No True Bill” (dismissal), or even removing an action to Family Court (to treat an individual as a juvenile rather than an adult). At the grand jury proceedings, there is no trial, no advocacy, and no summation. In other words, there are none of the typical components of a jury trial. Grand juries do not have to charge the crime investigated, either. In fact, they could choose to indict for a lesser offense or choose not to indict at all if the evidence is insufficient.

Consider the following example of the difference between the grand jury and the trial jury. Suppose Peyton Manning punches his brother Eli Manning in the face after Eli wins another Super Bowl, leaving Eli with a black eye. A grand jury would examine witness testimony, a picture of the bruise, and medical reports, amongst other evidence, before determining whether there is sufficient evidence to charge Peyton with assault. A trial jury examines the evidence to determine whether Peyton is guilty of the crime charged. Yet, nothing either jury can do will change the fact that Eli has more Super Bowl rings than Peyton.

Although protesters are calling for the indictment of Darren Wilson, the grand jury must remain objective in its assessment – justice compels it to do so, even if a vote of “No True Bill” catalyzes additional protests. The question ultimately comes down to the sufficiency of the evidence. The possible evidence includes ballistics reports, police reports, testimony from witnesses, forensic tests, autopsy reports, and other evidence, but what makes this case unique is that the investigations are still ongoing.

The grand jury’s task is a tremendous struggle because of the volume of evidence before it. To illustrate the difficulty of the grand jury’s task, consider two pieces of evidence: Officer Wilson claims that he was trapped in his vehicle and in fear for his life as Michael Brown reached for his gun, resulting in a scuffle where the officer sustained punches and kicks, leaving him with swelling and cuts. Now compare this testimony with the autopsy report: one of the bullets entered the top of Michael Brown’s skull, he was shot four times in the right arm, all of the bullets were fired into his front, and no gunpowder was present on his body. These pieces of evidence obviously conflict. The grand jury must weigh this evidence in determining whether the evidence is sufficient to indict.

Officer Wilson testified before the grand jury for almost four hours. This is an interesting tactic because the officer likely had to waive immunity to testify. In New York, Criminal Procedure Law 190.45 requires a defendant seeking to testify before a grand jury to waive immunity in writing. Case law on the grand jury immunity issue provides that a waiver with defects renders the defendant immune from acts that were the subject of the testimony. The officer was probably motivated to testify because his side of the story has been minimalized by the media. Testifying makes Officer Wilson appear forthcoming and cooperative.

The Supreme Court stated that the grand jury is to act as a “protector of citizens against arbitrary and oppressive governmental action.” A grand jury will likely make its determination by mid-November. While this case is complex, the outcomes are simple: Wilson could be charged with murder, a lesser charge like manslaughter or no charges will be filed at all. The attorneys at Schalk, Ciaccio & Kahn, P.C. are sensitive to the subtleties involved with grand jury proceedings. For additional information, contact a member of the firm. Grand juries can be intimidating, but having seasoned attorneys to turn to for guidance makes court proceedings easier to endure. 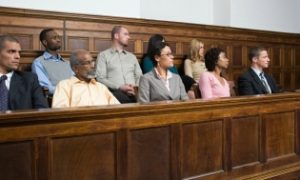